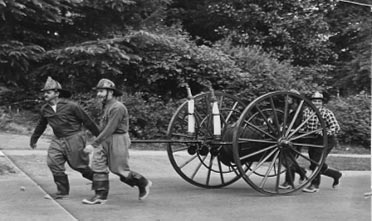 The need for organized fire protection in the then Town of Liberty became most evident on the morning of October 12, 1884, when a fire began in a store operated by J.N. Early on the southeast corner of Bridge Street and Railroad Avenue. When the fire was discovered in the early morning hours very little could be done, as there was no organized fire department and a meager water supply. When daylight came, only two buildings were left standing, and the scene was one of desolation. In the years to follow several important events contributed to the growth of this small town. When owners began rebuilding their downtown businesses they used more permanent materials such as brick and heavy timber. The town also began installing a municipal water supply and had installed twenty-five fire hydrants by 1886. Area business men met in the fall of 1887 to discuss the need for an organized fire company to protect area businesses and homes. Several months later in early 1888, the Bedford Volunteer Fire Company was organized with a membership of twenty-five volunteer firemen; most of whom were downtown merchant owners. To be properly equipped to protect life and property from the damage of fire, the company purchased its first piece of firefighting equipment, a hand drawn hose cart, known still today as "Hubb's Baby."

Because of lost or damaged records, it is unclear what events took place within the fire company between 1888 and 1906. Although un-documented, it is believed that these records were damaged by fire just after the turn of the century. The original location of the fire station is another item that is not documented; "Sandborn" maps of the Town of Liberty in 1891 show a two story "hose house” located on Court Street between East Main Street and Depot Street. Sandborn maps were drawn every five years for insurance purposes to show building locations, the type of building material used in each, and the number of stories each building stood. These maps offer important information such as the following taken exactly from the index of the 1907 map: "Fire Department-no hand, steam or chem'l eng's, two independent hose carts, no hook and ladder truck, 1000’ 2 ½” hose, 1 Vol. Co, 25 men, Fire Alarm by bell over Court House." The Sandborn maps show that the company had moved to its West Depot Street location by 1913 where the company shared the old “Market Building" with the mayor’s office and a dispensary. According to these maps the company moved to 807 West Main Street beside the Bedford Presbyterian Church in 1922 while a new firehouse was being built at the site of the old market building. The new two-story brick, two-bay firehouse was constructed facing Depot Street and offered the company room for apparatus, equipment, and a meeting room. Although several modifications were made to the building over the years to make room for more apparatus, the company remained at their Depot Street location until 1973 when the present day firehouse was constructed. The following notable events have been taken from the company’s recorded business meeting minutes:

March 1908 - Committee on rubber coats and boots reported 8 sets had been ordered.

February 1910 - Committee to appear before council for horse and wagon, nozzle, etc. reported that council gave everything asked for.

February 1913 - On motion, H.M. Wright and C.E. Harris appointed committee to appear before Council and ask for appropriation to Company of $250.00 per year and horse and wagon.

July 1916 - The following in regard to the Auto Fire Truck was adopted: The Truck is to be taken out for practice only on order of the Chief, and not to be driven outside the corporation during practice. The drivers to be Mason Preas, Hugh Preas, and Frank Saunders and others only when fully qualified to drive and handle said car. The driver of the car to any fire shall always stay with the car to care for it and the equipment and to keep parties off of it and the ladder. C.E. Harris appointed committee to install gong on the Fire Truck. 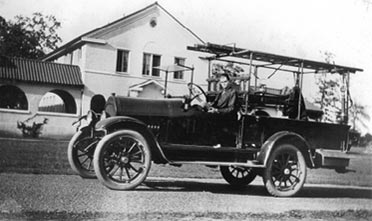 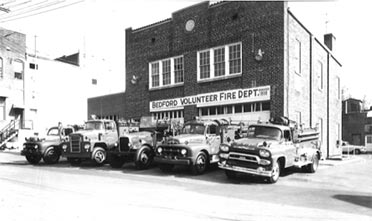 December 1933 - Company makes motion to approach Board of Supervisors to ask for funding to purchase necessary equipment to answer alarms in the County.

March 1935 - Company sends Claude Overstreet to First Aid School in Rocky Mount with hopes that he may qualify as an instructor and teach classes in Bedford.

February 23, 1940 - County fires were discussed. The stated that all firemen must report to the firehouse before going to a county fire. Not more than fifteen men will be allowed to go to a county fire.

January 26, 1951 - Chief Turner recommended to the Board of Supervisors to purchase a new county fire truck and to turn the present truck over to the Big Island Fire Company. He also asked that the county increase the $1,500.00 annual appropriation to $2,000.00 and that a two-way radio be installed on the county truck. The Board was very much in favor of these recommendations.

February 1, 1954 - Motion made and carried to paint the chief officers helmets white for the purpose of identity at fires when any one was looking for an officer, also their front shields on their helmets shall state their assignment, and all dress uniform badges to be gold plated.

March 26, 1954 - Chief Turner stated that he had ordered sixty (60) dozen brooms from the Bedford Grocery Company to be sold during Clean-up Week, and he stated he thought it would be a good thing to have a broom sale each year during the clean-up week.

March 23, 1955 - James Henry Howard made a motion to have forms printed with each fireman’s name in order, so when at fires you could only check each member present without having to write a full list, so carried.

August 8, 1958 - Motion was made by Royal Gross, seconded by Malcolm Vaughn, that the Secretary write a letter of invitation to the Moneta, Big Island, and Forest Fire Departments to attend any of our regular meetings or drills. Also send them a copy of our drill schedules. So carried by vote of the Company.

March 13, 1959 - Carlton Thomas, Chairman of the New Alarm System Committee, reported that 26 Plectron sets had been received and issued to first ten engineers and the rest to members who could get to the Fire Station quickest.

December 8, 1960 - The President also read a letter from the newly organized Brookville-Timberlake Volunteer Fire Department thanking us for letting them attend the recent fire school. Chief Milton stated that we should carry out the physical check up of each member every year.

June 9, 1966 - Chief Turner gave a demonstration of a new handie-talkie (Motorola) and said it would be nice to have one. After discussion at length, R.C. Thomas moved that we purchase (1) handie-talkie regardless of price, provided it has the approval of the Chief. Motion seconded by James Henry Howard, approved by the Company.

Nov. 12, 1971 - Chief Howard announced that there will be no more children riding equipment on alarms.

Jan. 11, 1973 - Chief Howard reported that the cost of an air compressor to be used in filling our Scott cylinders would be $1,500.00: the motion to buy this piece of equipment was made.

August 10, 1978 - Question of restoring Seagrave came up. Committee reported no action taken as of yet.

Sept. 11, 1980 - Chief Howard reported that James Parker and Russell Stevens, who took EMT class; now are going to take an IV class at Moneta. Chief made motion, seconded by Gary Parker, to pay any expenses the men would have. Carried. 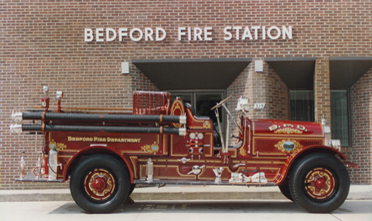 Mar. 7, 1989 - Chief Trail reported that the red phone will be disconnected as of March 8, 1989. No calls will be dispatched by the city police as of that date.

June 13, 1991 - James Parker reported that the P.A.S.S alarms for the SCBA had been purchased. There are twenty-two of them costing $113.00 each. He demonstrated how they were to be used.

May 14, 1992 - Mike Musgrove brought the company up to date with the ladder truck that would be available from Gruman. The truck would cost approximately $375,000.00. Mike felt the next step would be for the company to give its approval to continue and to present this request to city council.

At the January 26, 1927 meeting of the Bedford Town Council, the Safety Committee from the Bedford Volunteer Fire Company made the recommendation to purchase a 1927 Seagrave Model 760 triple combination motorized pumper for the cost of $12,500.00. The Town Council voted unanimously to purchase the pumper. The 1927 Seagrave served the department in some capacity until the mid 60’s at which point the town placed the pumper at the Bedford Water Reservoir as a backup pump for the water distribution system. The fire company re-acquired the 1927 Seagrave in 1986 and had it refurbished to its original state for the company’s 100th anniversary. When officials began talking about constructing a new Bedford Welcome Center, the fire company was approached about moving the Seagrave from the firehouse to the Welcome Center once opened. After much discussion about what was best for the Seagrave’s future, the company decided unnanamiously to house the Seagrave at the Bedford Area Welcome Center once completed. More people have had the opportunity to view the 1927 Seagrave at the Welcome Center than ever before. An entire wing of the Welcome Center has been dedicated to housing the Seagrave and displaying historical artifacts that tell the rich history of the fire service in Bedford County.

A little TLC today between calls for todays crew on our 1988 Pierce Dash. This truck was retired in 2008 and is now housed at our training site and assists with Firefighter I and Firefighter II classes through out the year. #Pride ...

You ain't lived til you go under the underpass below the fire house in the jump seat with a half a tank of water. I swear my feet rose up a foot when it twisted .

7:47AM - Company 1 along with Hazmat and Ambulance 14 was advised of a tractor trailer over turned on route 43 near the intersection of Smith Street in the Town of Bedford. E1 arrived on scene to find one log truck on its side with fluids leaking. The driver had self extricated himself with minor injuries prior to arrival. Be advised that this area of route 43 near the Town limits will be closed for several hours until the scene is clear. ...

Significant progress in the clean up already. I thought it was a small earthquake. Glad everyones okay.

This happens far more frequently than we hear about

Tammy Powell I see now why I couldn’t get through.😞

What company was this? My family has a truck like this

Prayers for the driver!!

4:56PM - Engine 1 and Rescue 1 responded to a reported vehicle fire at a construction site off of Oakwood Street in the Town. Fire was quickly extinguished with no reported injuries. ...

Is THE MATT SCOTT on that rig??

#TBT - The BFD is widely known through out the country for producing some of the best year end videos. These videos are released at the end of every year to recap some of the incidents during that time. The 2005 video was the very first we created. ...