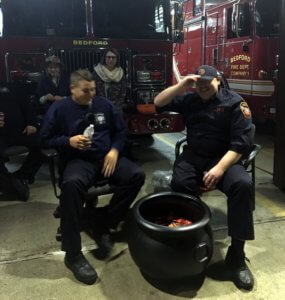 What do dinosaurs and Volunteer firemen have in common? 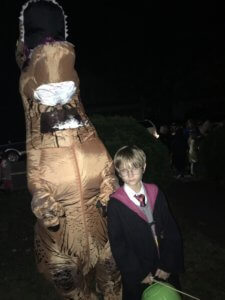 Besides being perpetually hungry, and willing to eat almost anything, not a whole lot.

Unless a volunteer fireman IS a dinosaur. No, I don’t mean old. Ok, well sometimes I mean “old” but not this time. This time I just mean that one of the firemen at Company One lived out his childhood dream of being a dinosaur on Halloween. If you missed him, he will probably be back next year. He’ll be the one in the inflatable T-Rex costume.

This year, as they do every year, the fine men and women of the Bedford Fire Department gave out candy to over 1000 local children on Halloween night. The Dinosaur didn’t help. His arms were too short.

If you didn’t make it by the fire house this year, be sure you mark the Fire Station on your Halloween trick or treat map for next year. They’ll be back with their giant plastic cauldron of candy, eager to share the sugar rush with all the Ninja Turtles, Cinderella’s and Harry Potter’s in the Town of Bedford.

1:40pm - The Bedford Fire Department responded to the 2700blk of Nicopolis Drive for the report of a field fire. Brush 1 (w/2) arrived on scene to find a 5 acre field fire that also included two structures used for storage heavily involved. Brush 1’s crew immediately began fire attack on the buildings while Wagon 1 (w/3) assisted. Brush 1A (w/2) and Brush 5 (Forest) began working a containment line around the field fire. Tanker 1 (w/3) established water supply along with Tanker 5 (Forest). Company 12 (Brookville Timberlake Campbell County) assisted Wagon 1 with extinguishing the building fires. Both the field fire and structures were marked under control at 2:29pm. After an extensive mop up all units cleared the scene at 5:07pm. ...

Thank you to all of the departments who responded and made this extremely difficult disaster end without complete tragedy for my family❤️ the kindness and understanding of these firefighters is appreciated and so helpful during a chaotic and scary time!!

I'm so glad someone video the newest truck. It's amazing

So very thankful to all departments

Nicopolis Rd? Or did you mean Nicopolis DR.?

6:49am - The Bedford Fire Department was dispatched to the 2200blk of Bold Branch Road in Moneta for multiple reports of a residential structure fire. Ladder 1 (w/6) and Tanker 1 (w/4) arrived behind Medic 14-8 and Tanker 8 to find a single story residence with heavy fire throughout. Crews assumed a defensive attack bringing the fire under control quickly. Companies 8 (Moneta), 10 (Saunders), 5 (Forest), and 13 ( Stewartsville) all worked to overhaul before units began returning to service. Co 1 units returned to service at 9:22am. No injuries were reported and the cause is being investigated by the Bedford County Fire Marshals Office. ...

Prayers for the family, sorry for your loss especially here at the Holidays

Did the ones who lost everything they had in this fire did the have any children? Also where can we donate things to help them Out ?

Matt Hops Scott I’m glad to see that you are back in service bro. Strong work BFD. 🔥

Terrible 😔💔. Glad y'all showed up

The fourth working fire in three days came last night at 9:30PM as Tanker 1 and Wagon 1 were added to the incident located on Gardner Farm Road for the report of multiple barns on fire. Tanker 1 (w3) was utilized as part of the tanker task force, as Wagon 1 (w4) crew assisted with fire attack. ...

That's awful. I hope no animals were injured. So sorry for the owners. 🙁

Doctor Gardner Farm? He Was The Best Vetanian

Do we need to worry about an arsonist out there?

8:08AM - Bedford Fire Department along with Company 5 (Forest), BCoFR Medic 14-1, and Ambulance 14 were dispatched to the 1100blk. of Shiloh Lane for the report of a basement fire. Engine 1 (w/4) arrived on scene 8:16AM to find a single story single family residence with smoke showing from the front door. E1 crew stretched a line to the C-side of the structure and gained entry through the basement door. A small fire was located and quickly extinguished with no extension to the rest of the home. Ladder 1 (w/6) controlled utilities, completed searches, and started ventilation. No injuries were reported and the cause is being investigated by the Bedford County Fire Marshalls Office.
It was determined that smoke detectors alerted the residence who were inside the home at the time of the fire were installed by the Bedford Fire Department in 2018. These detectors potentially saved the lives of two adults and five pets. ...

Love them when they work. Fresh batteries

4:00PM Bedford Fire Department was dispatched to the intersection of East Lynchburg Salem Turnpike and Krantz Corner for the report of a vehicle fire. E1 (w/3) arrived on scene at 4:05PM to find a SUV with heavy fire showing from the engine compartment. Fire was marked under control at 4:10PM. Rescue 1 (w4) assisted with removing the hood and overhaul. All units cleared the scene at 4:40PM. No injuries were reported. ...

What the heck? What number is that? 865? Why so many? So many have shared their experience with the bad gas in this area... could that be the reason? 😩

Abby Mills, this is what we saw earlier.

Wow, so many vehicle fires lately